Tamil New Year 2020 Kolam Designs: In India, free hand rangolis are very famous. But Tamil Nadu is popular for Pulli kolam. Pulli Kolam means rangolis with dots. There are two types of rangolis with dots in Tamil Nadu. They are ner Pulli Kolam and idukku Pulli kolam. For all the festivals in Tamil Nadu, people decorate their homes with this rangolis (kolams). They are known by following names ayudha pooja or Saraswathi pooja or vijayadhasami kolams, Diwali kolams, Pongal kolams and Tamil New Year 2020 kolam designs.

Here we give the information about the Pulli Kolam and idukku Pulli kolam. As the name ner Pulli Kolam suggest that the dots be placed in a straight line with equal dots to draw rangolis. Similarly, idukku Pulli Kolam the dots are placed at odds with a descending order, where the center line contain with maximum dots and the extreme corners of both sides with single dots. The rangolis with dot lines has different designs with 21line, 11, 13,15,17,19 lines. They can design some adventures with this rangolis by draw a flower, peacock, animals, Pongal pots, deepam designs, etc. After drawn these designs they colouring it according to their interest.

Tamil New Year is called as Tamil puthandu in the Tamil language. Tamil people around the world celebrate Tamil New Year by sharing wishes with their relatives and friends. Few people can celebrate the Tamil New Year by another way like conducting Tamil New Year kolam designs competition. Here people from various parts of Tamil Nadu will come and participate and exhibit their designs in front of the public. Finally, the best designs of Tamil New Year’s kolams were awarded some reasonable prizes. These rangolis were only drawn with the hands not using any special equipment, unlike ordinary rangolis.

For beginners, small pulli kolams will be helpful to learn how to draw rangolis with dots. It’s good to start it at the Tamil New Year by drawing a small Tamil New Year Kolam designs with their hands. Small pulli kolam will be like 5*5 lines, 5*4 lines, etc. The people who live in cities don’t have enough places to draw 15 lines kolams or 21 lone kolams. So they can try this small Pulli kolam for the Tamil New Year 2017.  Some people can try this every year to celebrate New Year. Kolams are also known as one of the traditional in India. 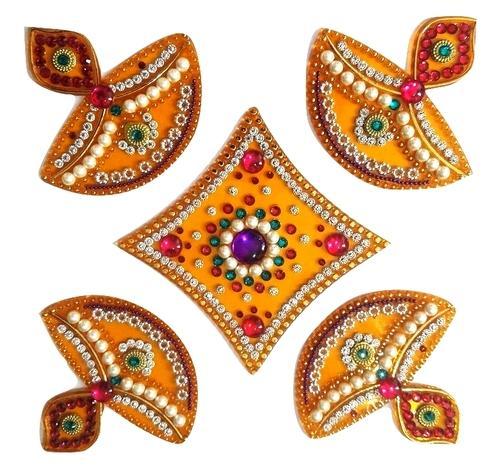